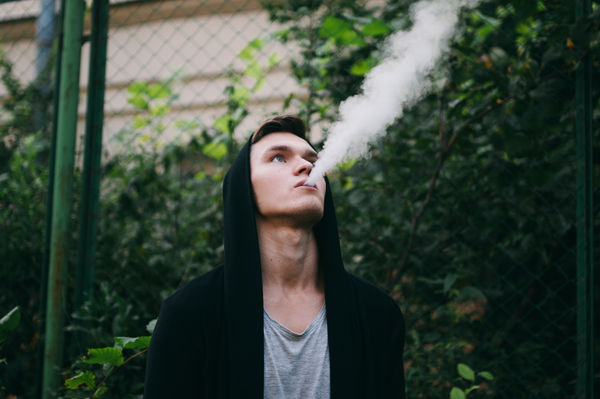 Vaping occupies a sort of middle ground between harmless outdoor activities, like knocking back a cold Irn Bru on a hot day, and more regulated stuff, like smoking tobacco. Oftentimes it tends to be lumped in with smoking, forcing vape users back into the same space as smokers&emdashwhich is what we’re trying to get away from in the first place.

So here’s an update on some common public spaces and what the regulations are on using e-cigarettes. Keep in mind that 2018 has been a great year so far for e-cigarette advocacy, so these rules may be changing sometime soon!

In case you haven’t ridden the bus lately, the insides are plastered with notices forbidding you from using your e-cigarette inside. To be fair, most buses tend to be pretty stuffy inside even without someone chucking clouds in the back rows.

It looks like Ryanair used to sell ‘smokeless cigarettes’ on their planes—somewhat like a characterless nicotine inhaler—back in 2009 and as recently as 2016. That being said, sometime in mid-2017, they changed their policy to forbid electronic cigarettes (including their own) aboard their planes.

Same goes for airports. While you are allowed to bring cigarettes abroad (assuming that the country you’re travelling to isn’t too hot on them), you’re not allowed to actually use your cigarette within the airport. As with Ryanair, Heathrow used to have a designated vaping area in Terminal 4, but it has since been closed. Which means that you’ll have to get your fix in one of the ‘designated smoking/e-cigarette areas’ outside of the airport before your long flight off to Vacationland.

The word is pretty firm on using e-cigarettes in major sports stadiums: generally speaking, you can’t do it. Man United and Man City will kick you out of the stadium if you’re caught vaping; Everton will reportedly take away your season ticket (if you’ve got one).

The notable exception seems to be Burnley FC, which in 2013 joined with Totally Wicked E-Liquid (also from Burnley) to permit vaping in the Bob Lord Stand at Burnley’s Turf Moor. Burnley’s contract with Totally Wicked was set to last two years, but we haven’t heard anything in the intervening years reversing the judgment on The Turf’s vaping-allowed areas.

So if you are going to a Burnley game, check out the rules on e-cigarettes when you get there. And let us know so we can update this article.

As regards smaller clubs, the rules start to vary. Your local club might be alright with you vaping pitchside, or they might frown upon it. An official at the pitch will probably be able to point you in the right direction.

Hospitals will have a blanket ban on both tobacco and e-cigarettes indoors for obvious reasons. Still, hospitals have proven remarkably open to the use of e-cigarettes elsewhere on the hospital property.

We’ve already covered how a number of hospitals across the country, like Colchester General and Ipswitch, have swapped out their onsite smoking shelters for vaping areas. Following strong support from government bodies like Public Health England, as well as private health advocacies like the Royal College of Physicians of London, hospitals have been opening up to the idea of pivoting to become more e-cigarette-friendly places.

Representatives for PHE have even advocated for opening up e-cigarette use inside hospitals, for the use of long-term patients, patients in single-occupancy rooms.

You’re not likely to be able to vape up a storm in a waiting room any time soon, but ask your doctor or staff at a hospital if they offer options for people looking to use e-cigarettes.

The long and short of it is: if you’re somewhere food is served, you’re not allowed to vape. It’s an unfair generalisation, but it’s accurate 99 times out of 100. Restaurants don’t tend to want their gustatory ambiance thrown out of whack by someone vaping Just Jam in the corner.

Still, there are edge cases. You’ll never be allowed to vape in a KFC, short of some serious legislative revolution; and most restaurants in town are probably not going to smile upon you vaping in their establishment either (unless they’re like a vape bar or something).

If you’re just hanging round your suburban local, however, you might be able to get away with it if they know you and they like you and you’re staying well out of the way. Like we said, it’s an edge case. But it’s not out of the question.

Obviously private shops are out of the question. As of the present you’re allowed to vape in your car, but the police have the prerogative to tell you to knock it off if it looks like it’s obscuring your view.

At work, it’s up to your boss. The more corporate the environment, the less likely you’ll be allowed. Sorry, White-Collar Willy.

It can feel like vaping is prohibited just about anywhere there’s any chance that people could be around. Luckily, as the science comes in on the safety of vaping—especially compared to tobacco use—new places are opening up to vaping everyday. So long as it remains respectful, we think vaping in public has a bright future ahead.