Will Success Escape Those Who Smoke?

Per a report by NHS Digital (2017), the price of tobacco has increased by 90% in the last 10 years and subsequently tobacco has become 27% less affordable. However, this hasn’t stopped Brits across the country from purchasing cigarettes, as 2.4 million people continue to light up.

Yet, it appears smoking may cost an individual a lot more than simply the cost to buy.

A new US study, published in JAMA Internal Medicine, reveals smokers will fare far worse on the job market. In fact, the study found smokers not only remain unemployed longer than non-smokers but they also earn substantially less when they are hired.

As Judith Prochaska, an associate professor of medicine at the Stanford University School of Medicine, comments: “There’s been good knowledge of the harms of smoking in terms of health, but it’s also important to appreciate the fiscal harms of tobacco use.”

In the study, 131 unemployed smokers and 120 unemployed non-smokers were surveyed, both at the beginning of the study, and then again during a 6-month and 12-month check-up.

The results showed that, after a year, just 27% of smokers had found a job – while a healthy 56% of non-smokers had successfully managed to secure roles. Furthermore, among those who had been hired by 12 months, smokers earned, on average, £4 less an hour than their non-smoking counterparts.

To ensure accuracy, those who oversaw the study kept to strict protocol, as co-author Michael Baiocchi notes: “We designed this study’s analyses so that the smokers and non-smokers were as similar as possible, in terms of the information we had on their employment records and prospects for employment at baseline.”

Indeed, even after controlling for variables, the re-employment rate of smokers was still 24% lower than that of non-smokers.

New data released by ONS, in Adult Smoking Habits in Great Britain (released: June 2017) further exemplifies this and shows the difference in the smoking rate of the employed compared to the unemployed. Currently, in the UK, just 16.10% employed people smoke but the unemployed have a far higher smoking rate, at 30.10%.

With the notion that smoking has the power to impact employment fresh in the mind, the team at successful e-cigarette retailer Vapourlites.com sought to conduct their own survey to find out more.

800 respondents – including 367 smokers and 433 non-smokers, varying in gender, age and qualification – participated in the survey and an enormous 82% agreed smoking is an obstructive habit, with the ability to stand firmly in the way of success.

64% went on to claim employers do treat employees who smoke differently to those who do not and, when asked, ‘If you are (or were to be) an employer – would you prefer to employ smokers or non-smokers?’, 43% admitted they would steer clear of employees who choose to light up.

Some of the comments taken from respondents include:

“Smokers take far too many breaks during the day and cannot work effectively without a cigarette.” – PR Consultant

“My line of work involves tight deadlines and turnarounds. I have experienced times when the team cannot locate any runners or loggers because they are outside smoking. It’s unfair for the members of the team left to cover their absences and means they have to work twice as hard.” – Television Assistant in Post-Production Management

“Non-smoking candidates are healthier, sharper and more likely to take less time off sick. Plus, they do not require a 15-minute break every few hours.” – Company Director

HOWEVER, a Marketing and SEO Manager adds:

“When it comes to employing someone, I would focus more on traits rather than habits or personal appearance. Just because someone smokes, it does not correlate to them being any less able. By pre-judging potential employees, you are limiting your company and potentially missing out on exceptional talent.”

It is evident there is divided opinion when it comes to the effects of smoking and the career prospects of those who choose to do it. Certainly, the outcome is always dependent on the individual. However, the facts remain clear; it is those with lower levels of education, and those in routine or manual work who smoke more and this reignites the idea that ‘success’ may escape you if you continue to light up.

By considering further data from ONS, we can see individuals with higher levels of education, such as a degree (9.30%) or A-Levels (15%) have a drastically lower smoking rate than those with low-level GCSE grades (D – G), at a shocking 23.60%, or those with no formal qualifications at all (20.70%.) 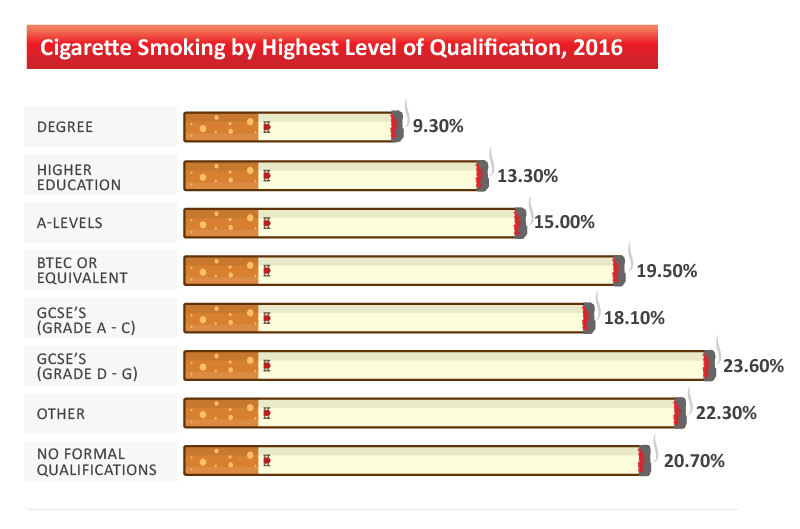 This data could explain the disparity between smoking rate by economic status too, as, those with a higher level of education are far more likely to enter career roles in managerial or professional occupations; with individuals in this category holding a current smoking rate of just 10.90%.

The smoking rate does increase slightly, regarding intermediate occupations (15%) but nowhere near as rapidly as those in routine or manual roles – with a staggering smoking rate of 25.70%.

Interestingly, in the survey conducted by Vapourlite’s, 91% of the non-smoking respondents held managerial or professional posts – such as a recruitment consultant, company director, NHS finance manager and estate agent department head. Conversely, 73% of respondents who currently smoke had jobs deemed to be more routine or manual, such as a baker, waitress, florist and sales assistant.

No doubt proving there to be a strong link between smoking and ‘success’ – or what society deems as ‘success.’ But, this is by no means a conclusive statement and certainly isn’t applicable to every case and individual. As a further respondent notes: “Smoking should bear no consequence on competence.”

What Can Be Done to Level the Playing Field?

Per an article in The Telegraph, a new Government plan claims vaping should be allowed in offices and enclosed public spaces, to ‘maximise’ access to safer alternatives to smoking.

Announcing a vision to create a ‘smoke-free generation’, ministers set new targets to cut smoking rates by one quarter in adults – and to stamp out the habit completely in younger generations.

It reminds employers that e-cigarette use is not covered by smoke-free legislation, so should not be included in policies which ban smoking.

“The evidence is increasingly clear that e-cigarettes are significantly less harmful to health than smoking tobacco. By allowing workers across the country to vape, safely and with awareness, it may help to alleviate smoking rates – with particular regard to those in routine or manual roles who are clearly struggling with addiction.

Individuals should not be penalised for their desire to beat an obstructive habit, which could take effect on both their health and personal achievements. To level the playing field, and to strengthen our support collectively for smoke-free alternatives, is to give every individual in the UK a better chance of success.”