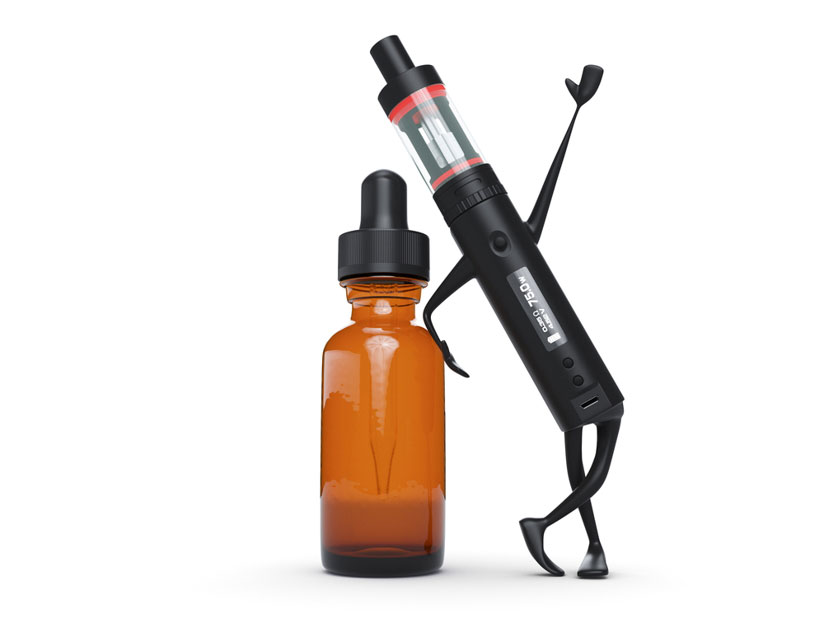 With a rise from 700,000 in 2012, to a staggering 2.8 million in 2016, it seems the increased use of e-cigarettes is not slowing down anytime soon. Research conducted earlier this year by Action on Smoking Health (ASH), highlights that 67% of individuals make the switch because they wish to stop smoking entirely.

However, such choices are not simply based upon stumbling across a vape shop and trading in one habit for another.  The vaping community is diverse, with multiple individuals entering from all walks of life, carrying a vast array of motives and stories. From the person reliant on their nicotine fix, to the disbelieving cynic; we spoke with our Vapourlites customers’, confirming that every switcher has a story.

Amy struggled with depression and turned to cigarettes to help relieve her symptoms. It was not until she purchased her first vape pen that she noticed a change in her mood.

“I had struggled with depression on and off for a number of years. Certain patterns triggered episodes and I was in a pretty rough place last winter. As the weather changed and days got shorter, my mood deteriorated. I knew I had to do something about it but the thought of getting clinical help scared me. I know others who have taken medication, disturbing them for years further. Determined to go down another route, I took up cigarettes. I wasn’t a heavy smoker and could feel the negative implications it was having on my body. I struggled to exercise which has always been important for my mental state. After researching into alternate products, I purchased my first vape pen and a 10mg Very Cherry e-liquid. Nearly a year on I love trying different flavours and alternate between 10mg and 4mg. Since vaping, I have found it easier to remain calmer than normal, whilst getting my nicotine fix which has genuinely lifted my mood when feeling low.”

Amy, like many others felt the benefits of nicotine, acting as a coping mechanism for individuals with mental health issues. During winter those suffering from depression are at their lowest, with many claiming they suffer the “winter blues”. Medically diagnosed, it is known as Seasonal Affective Disorder (SAD). With 1 in 25 suffering from SAD, winter proves to be the most difficult time to give up smoking. Individuals diagnosed with depression have found to be lacking in both dopamine and serotonin. Both exercise and nicotine increase the release of dopamine and serotonin, counteracting feelings of depression.

Ben smoked from a young age and admits his guilt to having taken up smoking to maintain his “cool” image in school. He was rather cynical about the idea of vaping until his friend insisted he tried it out.

“Looking back on my teenage years, I admit I cared far too much about my image. I started smoking socially with mates, which turned into a habit. I was never ashamed of smoking and although my girlfriend would nag me to quit, I never seemed to care too much. I was quite cynical when it came to e-cigarettes, and admittedly slightly arrogant about the concept. It wasn’t until one of my mates bought a new box mod and insisted I tried his former one did I give it a go. I used cigarettes alongside it, but despite my initial doubt, my cigarette intake was reducing rapidly. I was enjoying vaping indoors, without worrying about going outside to get my nicotine hit.

Two years on I have gone all the way, making the full switch to vaping. Vaping has become in some sense a hobby; I collect multiple vape kits and love exploring different flavours. It fits in with my lifestyle and I spend a lot of time chilling with my mates in vape cafes. I am able to vape when mixing with those who don’t smoke; I suppose in that sense I have once again become a “social” smoker.”

For one reason or another, many are sceptical about vaping. A number of people claim it is equally as bad for you as smoking. We can turn to Professor Michael Russell to help clear up this issue. In 1976 he claimed “people smoke for nicotine but they die from tar”. Electronic cigarettes feed the nicotine kick that smoker’s desire, but do not ingest the poison inhaled from the tobacco. Researchers have concluded that the danger of vaping is 95% less damaging to our health than smoking cigarettes. Those claiming otherwise are simply misled!

Paul was a smoker, but after seeing his friend go through a tough time with cancer, the fear of missing his kids grow up, scared him more than anything.

“I smoked around 15-20 cigarettes a day for over 20 years. I always wanted to quit, but the need was never quite there. It wasn’t until my friend Gary became ill with cancer did this change. He thankfully recovered; though going through treatment meant he missed poignant aspects of his children’s childhood. Watching someone close to me go through this, gave me the will I needed. After years of self-destruction, something had to change. When I first quit I missed how cigarettes tasted, so purchased a Cigalike. It was hard at first and I was getting constant cravings. The taste of my Cigalike did ease my cravings for a real cigarette and I haven’t smoked since! To be honest I vape a lot less than I ever smoked, I am not reliant on it like I was with cigarettes. I feel like a healthier man than I was 2 years ago, and I will hopefully live longer; which is always a plus!”

What Paul observed about his attitude as a smoker is common. To make the switch, you have to want to, or you just won’t. You need to find a way that works for you, like Paul did when choosing a first generation e-cigarette. The HSCIC published that 19% of people favoured the taste of smoking, acting as a component when attempting to quit. Well here’s to the 19%, get yourself a Cigalike and vape away!

So there you have it. Three of thousands of our customer’s, each with different reasons to make the switch to Vaping.  The bottom line is that no two stories are the same as another when it comes to vaping. What are your stories behind making the switch? We’d love to know!