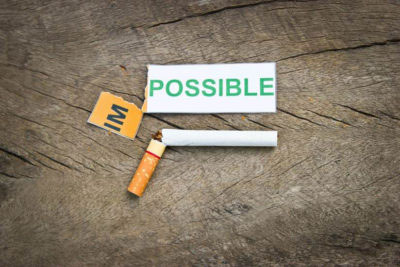 Quitting smoking isn’t easy for any individual, no matter how much you smoke; despite there being an abundance of methods to quit. Different individuals find success using different methods. If the more traditional methods of quitting (cold-turkey, nicotine patches, Nicorette gum, etc.) haven’t worked for you, then maybe trying one of these alternative approaches, or a combination will work for you.

Acupuncture is an ancient treatment that originated in China. It is an alternative or complimentary treatment for a number of health issues such as; chronic back pain, tension headaches, migraines and joint pain.

Through inserting needles into the skin, targeting certain pressure points and energy lines, it relieves pain and tension in the body. Psychologically, it can relieve stress and anxiety.

There is mixed evidence whether acupuncture works as a method for smoking cessation. It has been said that the cranial nerves stimulate the nervous system that crave cigarettes, so targeting those areas, particularly those in the ears can suppress cravings. There is allegedly a point that can affect the taste of cigarettes; the ‘Tim Mee’ point, located on the inner wrist.

In 2014, the Cochrane study reviewed 38 studies on effectiveness of acupuncture. Short-term effects were found to help smoking cessation, and some evidence for sustained effect on smoking cessation over 6 months was found, however evidence was too weak to draw any solid conclusions.

It is important to note that although acupuncture may reduce cravings, it cannot alter hard-set habits. Pairing acupuncture with other methods may be more effective than using it on its own.

Hypnosis is based on the idea of putting someone into an altered state of awareness. When in hypnosis people appear to be asleep or in a trance however they are not unconscious, it is a state comparable to being in between sleep and being awake.

This is used to help people quit smoking, as they relax and become more open to suggestion. Imagery is also used; users are told to imagine smoke poisoning the body, and to imagine their life smoke free, and all the positives it will bring.

Research has examined the effectiveness of this method. Some studies have pointed to benefits of hypnosis – improved sleep, decrease in stress and even decrease levels of depression. However, with regards to smoking, a 2012 review of a number of studies concluded that there is not enough evidence to support its effectiveness on its own.

It is important to note however that there are many case studies of individuals giving their personal accounts of having achieved success through this method.

If you are intending to try hypnotherapy, ensure you find a licensed and trained hypnotherapist.

Cognitive behavioural therapy (CBT) aims to restructure negative thought patterns and attempts to change learned behaviours (habits such as smoking) that trigger wanting to smoke. It holds the belief that when you change your negative thoughts regarding quitting, your behaviour will change in accordance.

CBT is most beneficial when used alongside other cessation methods, as effectiveness on its own is limited.

Remedies using natural plant-based ingredients have long been associated with helping alleviate and ease symptoms for a number of ailments.

It is therefore unsurprising that herbs can play a part in helping people quit smoking.

Certain herbs can be used to ease stress and anxiety and also reduce cravings. Herbs can also help to clear mucus and act as a decongestant, which eases the nasty effects smokers may face from smoking.

Chewing the root of the Calamus plant has been said to kill the taste for tobacco, however, use with caution as it can also cause hallucinations. Exert caution when using herbs due to their potentially harmful side effects.

‘Quittea’ is herbal tea containing ingredients to help you relax and control cravings. A number of customers were surveyed and found that 60% had less desire to smoke 9 weeks late 17% stated they were smoke-free.

Quitting with a friend who is also quitting at the same time can be a good motivator to hold off from cigarettes. They are able to understand what you are going through and offer you support, as they are going through the same thing and as the saying goes ‘a problem shared is a problem halved’. There is also an element of peer pressure that comes with quitting with a friend; you don’t want to be the one to relapse.

Nobody likes to lose money, so putting money in a jar every time you smoke can give you an incentive to quit. Another effective method is to put the money you would use on buying cigarettes into a jar, then counting the savings at the end of the month.  As long as you haven’t dipped into the jar, it should hold a fair bit of cash– why not treat yourself for your hard work?

Ensure you are getting those 5 a day! Research has found those who eat fruit and vegetables 4 times a day or more were 3 times more likely to have quit 14 months later, compared with those who ate fruit or veg two or fewer times per day. The results were the same even when controlling for a number of variables.

So there we have it. If you are losing faith in your ability to quit smoking, do not give up! There are many methods out there, and usually, it is a combination of two or more methods that help people quit. It’s about trying things out, and seeing what works best for you.