Why you should give up smoking to enhance dating success 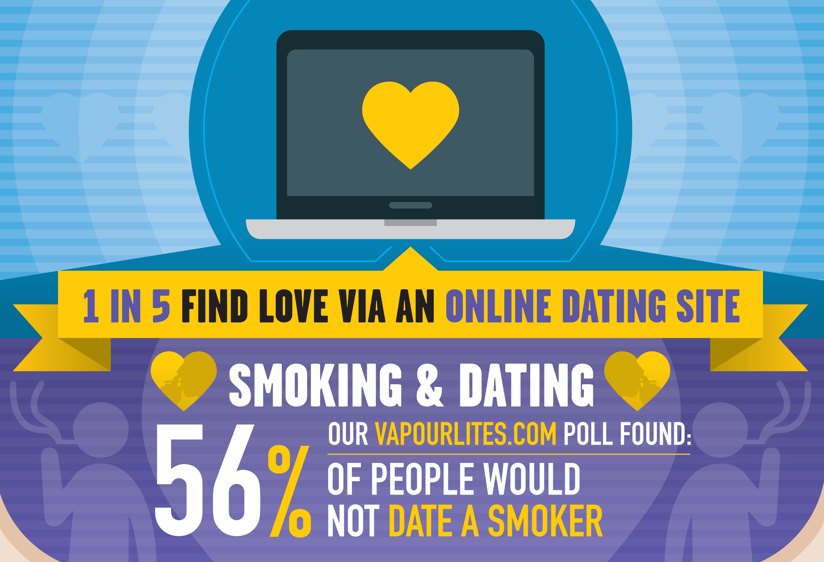 One in 5 of us have found love online via a dating site. There is now a plethora of dating websites available to us – from uniformed dating to dating for cat lovers, we can now be pretty choosy when it comes to finding a suitable partner.

This leads us to the question:

Is dating a smoker a turn on or turn off, when considering a partner?

After all, it is no secret that smoking is not good for your health and has a number of undesirable effects on the body and mind.

Action On Smoking and Health found that the population of people smoking dropped by more than a half between 1974 and 2014. Moreover, the number of those smoking is continually decreasing even more rapidly now that vaping has been introduced as an alternative way to aid quitting – more and more people are making the switch.

Match.com, an online dating website, found men prefer women who are active and easy going and women prefer men who are confident and sporty. Interestingly, they even found that listening to Radiohead and reading The Great Gatsby peaked people’s interests in potential partners. When it comes to smoking, a recent poll found that 58% of respondents said they wouldn’t consider dating a smoker, but polls from other websites have found it to be as high as 75%; making smoking a deal breaker in the dating world. Smoking can have a negative effect on your physical appearance, mood and even your sex life which makes these statistics all the more understandable. It’s time to dig out your Radiohead CD and ditch those cigarettes whilst you’re at it.

Please include attribution to vapourlites with this graphic.

Smoking can make you smell and that smell can linger for a long time. There is a reason the phrase smoker’s breath; exists, and the science is out there to prove it. Smokers breath happens due to smoke particles remaining in the throat and lungs; leaving the mouth dry, due to the mouth becoming a chemical filled environment where oral bacteria can thrive. In the long-term it can even cause tooth decay, a symptom of which is halitosis. However, unlike cigarettes, e-liquid, no matter the flavour does not leave a lingering smell as the smoke; as you would call is it, is merely water vapour.

Smoke can also cling onto clothes and furniture, although as a smoker you are less likely to notice this, because smoking has also been found to dull your sense of smell and taste.

Nicotine mixed with oxygen produces a yellow substance and when it is combined with tar it can cause your teeth and skin to become stained, which can be unsightly and something that could potentially hinder your dating chances.

The dangers of passive smoking have long been demonstrated through research. Inhaling second-hand smoke can increase your chances of lung cancer by up to one-third. The smoke that burns off the end of the cigarette may even be more toxic than the smoke inhaled by the smoker. Subsequently, this is a concern when finding a potential partner.&nbsp;

Smoking can harm your skin and add years to your age. This is due to alterations in skin temperature and oxygen, as well as smoking impeding the blood supply that keeps the skin looking healthy; the result of this is that your skin becomes dry and more wrinkled. If you do smoke, ensure you keep a supply of skin moisturizer and drink a lot of water to keep your skin hydrated!

In a study by the International Journal of Impotence research, smokers who smoked 20 or more cigarettes per day reported more dissatisfaction in their sex life. To back this up, a study by the British Journal of Urology found that men who had quit smoking could get sexually aroused faster. Overall, quitting smoking leaves you feeling more energized, less lethargic and more revitalized in general. As a result, you and your partner will feel more satisfied in the bedroom.

Perhaps most importantly, quitting smoking improves your mood. This has been scientifically proven repeatedly, with one report citing it as effective as antidepressants. A research paper in the British Medical Journal found measures of anxiety, depression and stress all significantly decreased when following up people who had quit smoking.

How to quit smoking

Don’t worry if you are a smoker on the dating scene as of course smoking isn’t always a push-factor when looking for love. However, there are many reasons to quit smoking, although no one has ever claimed it to be an easy ride. Luckily, there are a number of ways to help you quit smoking; the patch, nicotine gum and the recent and increasingly popular e-cigarettes. These options are worth considering if going cold turkey hasn’t worked for you. Always remember in the long run you will feel happier and more energized and the better you feel, the more it will come across to a potential partner!