Where can you use e-cigarettes? 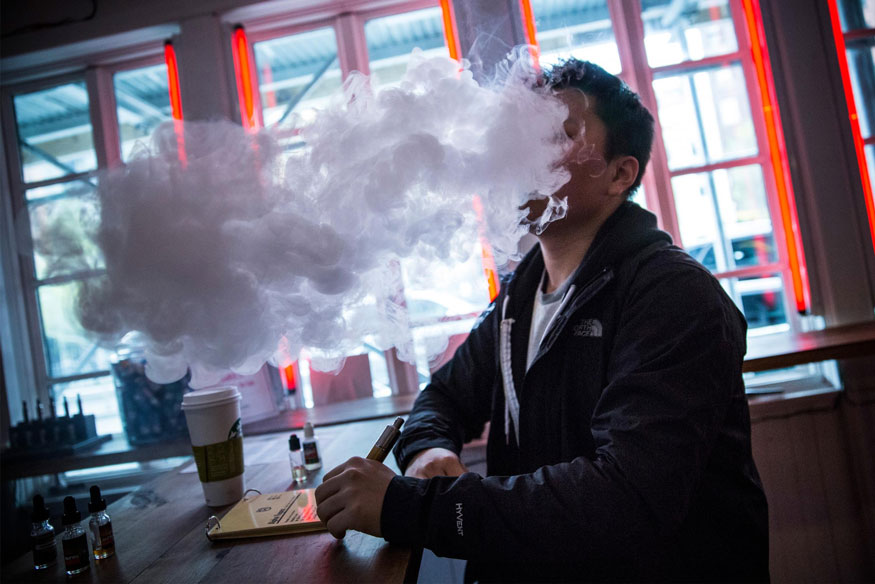 Award-winning journalist, novelist and avid e-cigarette user, Will Self, had a run in with a Pizza Express manager and their company policy on the weekend. In his latest opinion piece for the New Statesman, the acclaimed writer explained his conundrum with the nonsensical compliance of employees to stop customers using their electronic cigarettes on the premises. Although, it is not against the law to vape in enclosed public spaces, many companies have decided to enforce a jurisdiction of their own.

There are very few locations that have decided to allow vaping inside their premises, in fact, 90% of the companies we contacted did not allow the use of electronic cigarettes indoors. There is currently no national legislation in place anywhere in the UK which determines whether organisations should allow products to be used on their premises or not.

The ban on smoking cigarettes indoors was introduced in 2007, and at the time, there was huge uproar by landlords, pub companies and smokers’ groups, saying the ban would be a disaster for many pubs and clubs and the impact on people’s social lives would be huge. But as we all know, the ban was incredibly effective, and people did not stop going out or socialising because of it. Smoking prevalence among UK adults has decreased year on year since 2007 and is now down by 6.4% since the ban began. So if the ban on smoking achieved anything, it got people on the way to quit smoking.

Since the introduction of e-cigarettes, quit smoking success rates have increased. Where in 2010 stop smoking success rates were 13.4%, in 2016 it has increased to 20.7%, thanks to electronic cigarettes. Now, pubs, bars and restaurants have the opportunity to help even more people stop smoking by allowing customers to use e-cigarettes on their premises while they attempt to quit. Yet, none of them allow it and send would-be quitters outside along with smokers. The government have left it up to business owners to decide their own e-cigarette policies, but you would think it is part of UK law by the way companies have legislated e-cigarettes. There is a growing body of evidence to support their positive contribution to improving public health. But companies remain reluctant to embrace a forward-thinking approach, leaving vapers out in the cold.

Here’s a list of well-known companies and their vaping policies:

Heydon Mizon, Retail Director for the McMullen pub group said “we have the same policy for electronic cigarettes as we do for tobacco.”  Which is, of course, no smoking permitted indoors, only in designated smoking areas outside.

Wetherspoons have this policy posted on their FAQs section of their website; “We do not permit the use of electronic cigarettes or vaporisers outside of the designated smoking areas on our premises.”

Mitchells & Butlers own many restaurant brands such as All Bar One, Harvester, Toby Carvery, Miller & Carter and O’Neill’s to name just a few. Their policy as published on their FAQs states “For the comfort of all of our guests Mitchells & Butlers do not allow the use of electronic cigarettes within our premises. Although we realise that the fumes are just vapours and non harmful, this is not clearly understood by everyone and can lead to confusion for others.”

A spokesperson for Zizzi’s told us “At Zizzi we ask for the comfort of other guests that eCigarettes are not used within the restaurant. Although there is no legislation currently with regard to this we have taken on feedback from guests and put this policy in place.” A reasonable response from the restaurant chain, but it seems the public have spoken.

A McDonald’s spokesperson gave us this statement “We strive to ensure that our restaurants provide a friendly and welcoming atmosphere for families. Owing to the fact that e-cigarettes can be very realistic and customers may naturally assume that someone is actually smoking on our premises, we do not permit use of e-cigarettes in our UK restaurants.” This policy shows that McDonalds are not condemning e-cigs for health reasons, simply that their customers may mistake vapour for smoke. Perhaps McDonald’s could introduce “vaping allowed” stickers to help prevent the confusion. Either way, we think their policy may be open to change in future.

A SUBWAY® spokesperson said “All SUBWAY® stores are independently owned and operated by franchisees, who are independent business owners. As such, policy relating the use of e-cigarettes in-store is determined by individual franchisees. Where the use of e-cigarettes is forbidden by the franchisee, we expect it to be clearly displayed so as to avoid any customer confusion. The health and well-being of customers and staff is of our utmost priority to ensure an enjoyable experience in SUBWAY® stores  for all customers.” This stance is one of the more positive approaches to e-cigarette use, and we would advise checking with members of staff or looking out for signs inside Subway stores to find out the policy in each branch.

Quite a few supermarkets now stock many various brands of e-cigarettes, yet many of their store policies are against using them. This means the supermarkets are happy to sell e-cigarette products to customers, but indeed do not support people using them in their store. Ironic?

When we asked Sainsbury’s about their e-cigarette policy they said “These are not to be used in store” without giving a reason for why, we can only assume for the benefit of non-vaping customers. They currently sell 22 e-cigarette products including vape pens, e-liquids, cigalikes, refills and rechargeable kits.

An Asda spokesperson said “at Asda we like to encourage a family friendly, smoke-free environment for the benefit of all our colleagues and customers, and we have no plans to allow e-cigarettes outside our designated smoking areas.” Asda too stock a large range of 44 e-cigarette products, yet do not allow the use of them in their stores.

Marks and Spencer told us “We do not allow e-cigarettes to be smoked in store”, but unlike Asda and Sainsbury’s, they do not stock any e-cigarette products. Considering e-cigarettes cannot be smoked, it’s quite possible that they aren’t aware of the differences between smoking and vaping.

According to the BBC using electronic cigarettes in Starbucks and Café Nero is also banned.

Starbucks commented on the matter saying “We take pride in offering a comfortable and inviting environment for our partners (employees) and customers. As such, we have implemented a no-smoking policy for our company-owned stores to include inside our cafés as well as any outdoor seating areas designated for our patrons. This policy also applies to electronic cigarettes.
In addition, we are committed to ensuring that our stores comply with all applicable state and local laws. Please know that Starbucks partners do their best to politely and professionally manage and inform any customer who may be violating any law or statute pertaining to smoking restrictions.”

We don’t dispute Starbucks’ policy as they have every right to decide how they regulate in their stores. However, to claim that the use of e-cigarettes “may be violating law” is ridiculous. It certainly is not against the law to use e-cigarettes in public, there are in fact no laws in place about this in the UK. Shame on you Starbucks.

It’s not all bad news though as there are still a few places that allow vaping:

Most D and D London restaurants:

Emma is our resident e-liquid expert, with over 10 years in the vaping industry there's not a flavour that Emma hasn't tried. She's a huge advocate of those dessert flavours (no calories in vape, right?) and isn't a huge fan of koolada. When she's not punching informative content out on our blog, she's driving round the country picking up parts that have fallen off her beloved Alfa Romeo.