What do office workers think about smoking? 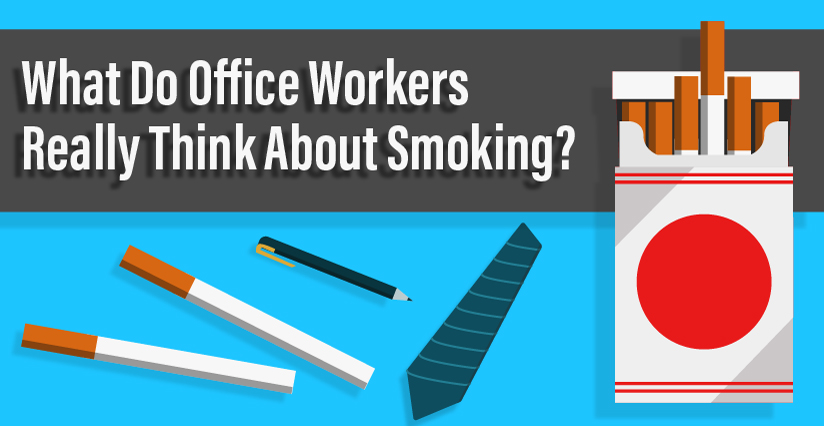 Most office-based employers, regardless of their stature and industry, have a number of workers who smoke. Their tendency to smoke may be used as a coping mechanism to handle work-related stress and pressures. Many employers therefore willingly allow workers who smoke to do so whenever they get the urge. Whilst it may seem like a satisfactory arrangement, workers who don’t smoke may feel otherwise.

From their point of view, aside from the legally required 20-minute rest break that employees are entitled to for working six hours or more, as well as a one hour lunch break, smokers take more breaks during the day to indulge in a cigarette. These ‘additional’ breaks to fuel their ‘vice’, accumulates to less time spent on work than their non-smoking counterparts. In a bid to uncover the truth about smoking in the workplace, here at Vapourlites.com, we wanted to investigate what office workers think about smoking?

During a seven-hour working day (excluding lunch hour), an office worker might take five minutes to smoke every hour, resulting in 35-minutes of paid break time. If a non-smoking office worker took the same 35-minute break, per day, then it is justifiable to see why they might view it as unfair.

Even though the length and frequency of smoking breaks varies between different employees, a study on behalf of the British Heart Foundation did astoundingly revealed that smokers disappear up to four times a day for a duration of ten minutes each. The same study also found that smoking breaks cost employers an astronomical £1,815 a year for each full-time employee who regularly puffs away during working hours. 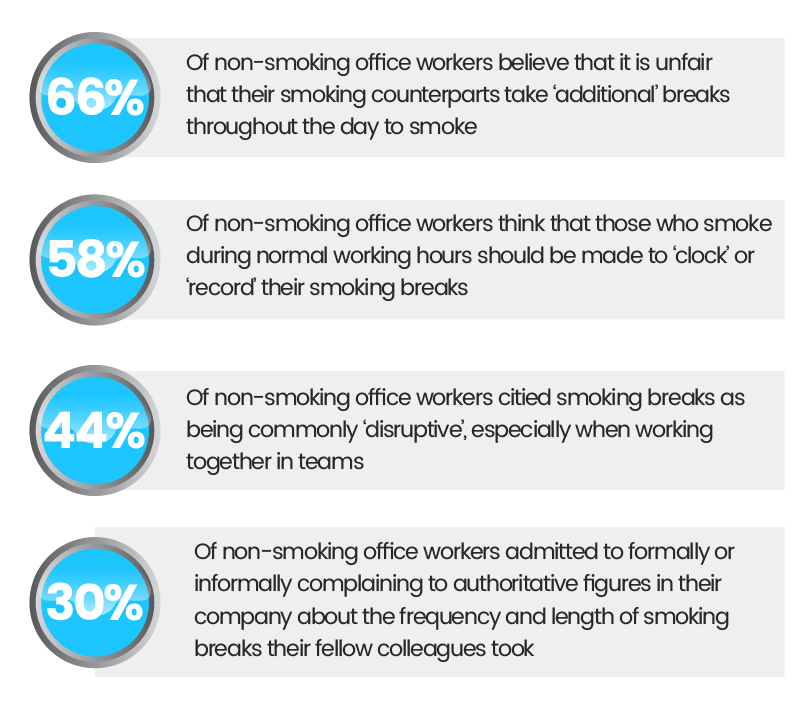 “The financial world, just like many other industries, is very fast-paced. The expectation to adapt and deliver favourable results is consistently high. Stress therefore naturally creeps in. To cope with the stress, many of my fellow colleagues smoke. Some more than others. For me it’s not a huge problem but I feel the constant smoking breaks disrupts the flow of work. With multiple team projects to deliver under tight deadlines, it becomes difficult to properly discuss and coordinate different aspects when individuals are nipping in and out to have a smoking break during actual working hours. So in that regard, it does eventually become annoying”.

“I understand that many of my colleague’s smoke to gain relief from the everyday pressures of work. They take numerous smoking breaks throughout the day, which usually last between 10 to 15 minutes each. These equate to additional breaks on top of what is already provided and it’s unfair on those of us who don’t smoke. Essentially, it feels like we are working more with less breaks than those who smoke. I believe that companies need to actively enforce a fair cap on the duration of smoking breaks to limit excessive disruption and time-wasting during working hours”.

Damien, Co-founder and Managing Director of a Digital Marketing Agency in Birmingham commented:

“Initially when we started out, there were a few of our non-smoking employees who did complain about the number of breaks their fellow colleagues who smoked where taking. They were irritated by the fact that that they could go for a puff whenever they desired. It’s when I received their complaints, that I did really see their point of view. Through allowing them these ‘unofficial’ breaks, we were effectively reducing the working hours for those employees who smoked whilst maintaining normal working hours for the rest. To address the situation, we decided to introduce two ten minute breaks on either side of the lunch hour for all the employees. These uninterrupted breaks have worked fantastically well for the smokers as well as non-smokers. It’s created a fair system for both parties and positively contributed towards a harmonised working environment. I would recommend the same or similar concept to all companies facing the same dilemmas”.

Simon Clark, the Director of pro-smoking group Forest, has previously provide a fascinating view as to why smoking breaks should not be penalised through any ‘clocking’ or ‘recording’ mechanisms in comparison to other ‘breaks’ that non-smokers traditionally take at work.

“Can non-smokers truthfully say they’re not making personal phone calls, browsing the internet or taking coffee breaks? The problem is that when smokers take a break it’s very visible because they have to go outside.”