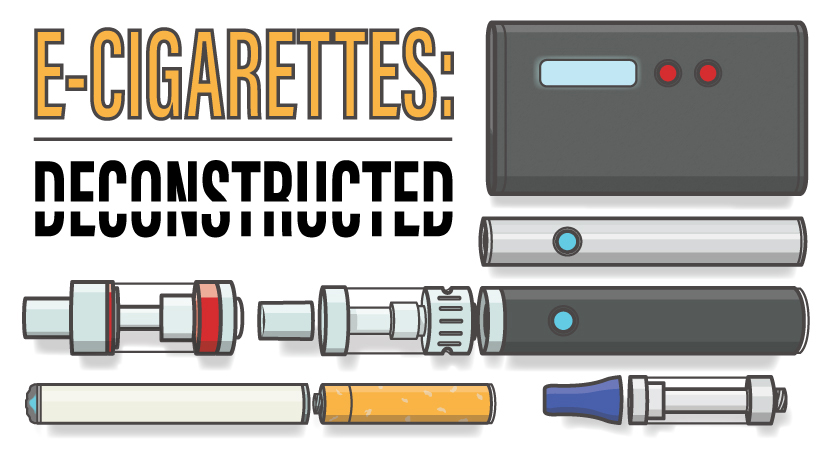 E-cigarettes have made quite an entrance into the mass market, with shocking media stories about exploding batteries and celebrity vapers being snapped at awards ceremonies with e-cigs in hand. Whether or not exploding e-cig stories are real or fake we aren’t sure, but one thing’s for certain, e-cigarettes have boomed in popularity at an astonishing rate. . With e-cigarette use increasing from just 2.7% of all GB adult smokers in 2010 to 17.6% in 2015. But just because they have become the hot product of the moment, doesn’t mean everyone knows what e-cigarettes are.

You’ve probably seen plenty of people walking around with various contraptions and devices but you might be unsure how exactly they differ. And if you are interested in quitting smoking and taking up vaping to help stop, then we want to take the confusion out of buying e-cigarettes for the first time. Below is our guide to e-cigarettes, including what they are, what different models are available, what equipment you need, how much you will expect to pay, and general benefits versus traditional tobacco cigarettes.

As a concept, the e-cigarette is a nicotine delivery device which does not contain any tobacco nor emit the harmful chemicals related to the burning of tobacco common in cigarette smoking. This is the main difference between e-cigarette inhalation and tobacco cigarette smoking. E-cigarettes are powered by electricity through rechargeable lithium ion batteries and are not lit by flame (hence the ‘e’ in e-cigarette).

How many different types of e-cigarettes are there?

As the market has grown and new suppliers have innovated different designs, the form and function of each e-cigarette has transformed over the years. Currently there are four broad types of e-cigarettes and here’s how they differ:

The first types, or first generation of e-cigarettes are called cigalikes. They highly resemble the look and size of a tobacco cigarette, even containing a small LED light that glows upon inhalation to resemble the experience as closely as possible. They are ideal for current smokers looking to start their quit smoking journey.

The outputs of cigalikes are pretty low in comparison to the other types of e-cigarettes. The battery has to be smaller to fit into the cigarette-size design, therefore, it is only a 180 milliamp hour (mAh) battery, and although it may be small, combined with the pre-filled cartomizer there is enough e-juice to last approximately 40 cigarettes.

Hon Lik, a chemist from China, is credited as the inventor of the original e-cigarette back in 2006 while he was researching an healthy alternative to the harmful cigarettes populating his native country. The cigalike really took off when A UK duo, Umer and Tariq Sheikh, took Hon Lik’s idea of an ultrasonic atomizer and combined the cartridge and atomizer into one, user-friendly piece which is now known as the cartomizer.

This is the second generation of e-cigarette, a progression from the original cigalike design. It distinctly has changed from the tobacco cigarette resemblance to more of a pen-like design. These devices have changed the way e-cigarette users can consume nicotine, by introducing separate and larger easy-fill tanks between 1.3 – 1.6ml max volume. This meant that customers could purchase their e-liquid of choice and vape for longer. These e-cigarettes are longer and wider, being roughly double the length and width of the cigalikes. A bigger casing means these pens are able to hold larger battery sizes and more liquid through the introduction of a detachable tank. This e-cigarette is ideal for beginners who are looking to try e-cigarettes and different nicotine strengths.

The potential output is inevitably higher in e-cigarette pens compared to the original cigalike, as the larger casing meant a bigger battery could be hosted. The battery size of these designs ranges from 400 to 650 mAh, meaning on full charge it will last for up to 6 hours, depending on frequency of use. Also the bigger capacity tank means with a 1.6ml tank will allow the equivalent use of 3 packs of tobacco cigarettes.

This design essentially changed the way e-cigarette users could vape. It opened up endless possibilities of choice, as for the first time users could buy and select which flavour and which nicotine strength e-liquid they preferred.

Due to the simplicity of the e-cig concept, which is essentially just a battery, a heating element, juice and casing, people started experimenting and modifying their own creations back in the 2000s. The box mod was born out of this trend, as vapers themselves led the way through innovation testing out bigger and better models. And even though many e-cigarettes are manufactured and sold by companies like Vapourlites, because the ease of breaking down the different components of each product, most are modifiable and customisable with interchangeable tanks, clearomisers and battery/mod packs. This mod is for more experienced vapers who are looking to explore different wattages and for a bigger capacity e-cigarette, perhaps as an upgrade from a vape pen.

The box mod has the highest overall output because of it’s large casing and subsequent huge battery size. Typically box mods take battery sizes of up to 2600 mAh, which is a pretty significant upgrade from the 180 mAh battery in the original cigalikes.

The box mod was born out of the vape subculture, and really pushed the boundaries as people, not companies were leading the way. When manufacturers collaborated with users they were able to engineer different battery configurations and even digital mods with variable voltage and wattage settings.

These sub Ohm kits are one of the newest versions of e-cigarette equipment we offer at Vapourlites. The sub Ohm kit has been developed to give you the best experience in vaping clouds. When it is paired with a higher VG e-liquid like our Alto range, it produces impressive clouds. This kit was designed for the veteran vaper who knows a thing or two about adjustable airflow. It is essentially an alternative to the wider box mod with a little less power. This e-cigarette kit is perfect for someone looking for an all-day vape, with adjustable air flow and a long battery life central to your needs.

The sub Ohm e-cigarette is another high capacity piece of kit, supporting an impressive 1500 mAh lithium ion battery. This large battery capacity combined with a slightly bigger 2ml tank means one charge will last you more than a day. Due to the efficiency and power of this tech, its possible to lower your normal dosage by half, to preserve your e-liquid juice and get the same result.

The sub Ohm kit has allowed vapers to enjoy their favourite juice for longer, without using half as much of their e-liquid. It is an exciting step towards the future of e-cigarette technology. This is the result of almost 10 years of technology evolution, and look how far we’ve come from the humble designs of Hon Lik’s cigalikes.

Some e-cigarettes hardly even resemble the tobacco cigarettes they were designed to replace. We ask what’s next in the exciting world of e-cigarette technology?