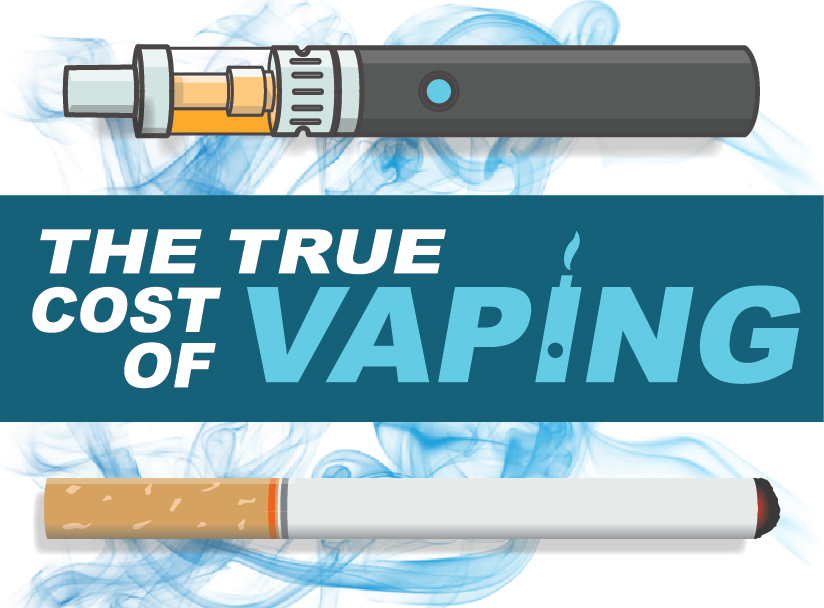 Vaping has been cited by medical professionals, bodies and organisations that switching to e-cigarettes, when supported as a means to quit smoking is 95% healthier than smoking. There is no debate that e-cigarettes has caused a stir in recent years. The general public remains sketchy about the nature of e-cigarettes, with perceptions of harm growing with only 15% of the public accurately believing in 2016 that electronic cigarettes are a lot less harmful than smoking (ASH). However, what many fail to consider are the statistics against the true cost of vaping.

In February 2016, ASH conducted another report explaining the use of e cigarettes, eliminating fear of potential harm from vaping. Most second hand smoke comes from the burning tip, and by contrast, e-cigarettes do not generate this side stream smoke that cigarettes do. E-cigarettes, only contain nicotine, other particles such as flavours, aroma transporters, glycerol and propylene glycol. Public Health England conducted a report in 2015, that had assessed the amount of nicotine released into the air, and reported it poses no identifiable risk to bystanders.

However much you hear; both good and bad, regarding the nature of e-cigarettes, the use of this new cessation aid is helping smokers switch and successfully quit smoking after a period of time. The true cost of vaping includes benefits to the environment, finances for individuals, business productivity and various health benefits that are associated with giving up smoking. By switching to vaping, e-cigarettes are providing those who find it difficult to give up smoking, a positive and new form of aid; and as reported by The Royal College of Physicians, if used correctly and regulated, e-cigarettes have the potential to prevent premature deaths, disease and social inequalities, that smoking currently causes in the UK.