Should There be Office Vaping Rooms? 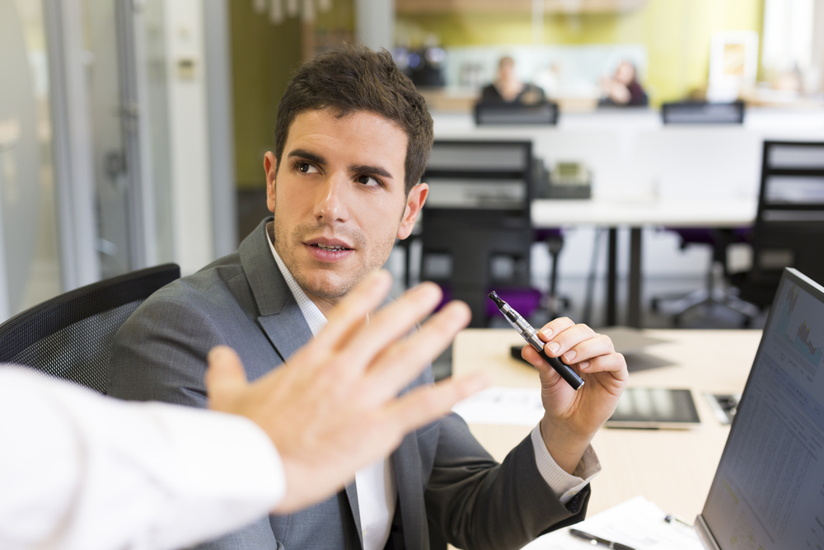 For much of the ‘70s, ‘80s and ‘90s, offices up and down the country were filled with smokers, and with them toxic hot boxes that were, the smoking room. Thinking about it now, in retrospect, they sound like the most awful places on earth. Now we know the deadly effects of tobacco smoke, as the biggest to public health. They were concentrated areas of gloomy carbon monoxide, singed carpets and yellowy discoloured ceilings. The very walls were dying. And workers saw this as a 5-minute haven of relief. How times have changed! So should there be office vaping rooms?

Public Health England have issued new guidelines in their latest report that suggest indoor spaces should be made available at companies with vaping staff. They also advise workplaces allow extra breaks for frequent top-ups of nicotine, due to the smaller nicotine hit e-cigarettes provide. An important part of the guidelines is that vapers should not be forced to mix with smokers as this “will undermine their ability to quit smoking”. It should be made clear that vaping is not at all associated with smoking, and companies are advised to not use smoking terminology when discussing e-cigarettes. PHE want ill-informed companies to leave rigid rules behind, that have seen e-cigarettes needlessly grouped together with tobacco products. Which in most places, means an all-out ban on smoking altogether, or requiring employees to leave the property to get a nicotine hit outside. This is okay for smoking employees, but not for vapers.

So what’s the best policy to manage e-cigarettes at work?

Following PHE advice, business owners should consider utilising small rooms, and unused meeting space for dedicated e-cigarette areas. Some companies have been very liberal with their policies and have allowed their employees to vape at their desks. All that is required is common sense. Do not send people trying to quit smoking outside with the smokers. Either stagger breaks so that vapers and smokers don’t mix, or if you have the capacity consider designated vaping areas within offices. It doesn’t even need to be a whole room; open areas like the kitchen or boardroom would suit, as vapour is very different from cigarette smoke as it will not leave a lasting bad smell, discolour ceilings and walls or produce messy ash. It is a cleaner and much healthier alternative and could make a big difference to your workforce’s overall health. Imagine all the money you’d save if all those who smoked in your workforce switched to vaping. There would be far less sick days and hospital visits, making your team a whole lot more productive, you could even see positive effects on your business results!

Interestingly, vaping is still banned in many places and at many company outlets visited by the public. A previous article we wrote in April explained that vaping was banned in most restaurants like Zizzi and Prezzo as well as supermarkets such as Asda and M&S. But surely, after Public Health England’s advice and the Royal College of Physicians report, these businesses must consider a different approach to policy. Otherwise they’ll be cutting out 2.8 million people from their potential customer base.

In a recent study conducted by an international group of scientists from the US, Canada and Australia, they projected that e-cigarettes would lead to a 21% reduction in smoking-attributable deaths and 20% drop in life years lost, for people born in or after 1997. The scientists believe their model shows these results would not have happened if e-cigarettes were not an option.

There’s a growing body of evidence on e-cigarettes, confirming them as a much safer alternative to cigarettes. With reputable health organisations issuing guidelines for their inclusion at work and in general life. There have been calls from both PHE and the RCP that the government should be careful of overregulation, and most importantly that the conveyance of e-cigarettes as an alternative to cigarettes is made very clear. We are eager to see how businesses and company workplaces alike will respond to these new guidelines. Science can only do so much, but it’s only a matter of time before people start to listen. And see how e-cigarettes can make a positive change to public health.