The relationship between smoking and mental health

According to Samaritans, more than 800,000 people take their lives each year across the world – which equates to one person every 40 seconds. Up to 25 individuals attempt suicide, which means that there is a substantially higher number of people with depression. In the UK and Ireland, more than 6,000 people die by suicide a year – an average of 18 people a day. According to the mental health charity, MIND, how people cope with mental health problems is getting worse as the number of people who self-harm or have suicidal thoughts is increasing. More shockingly, 20.6 in 100 people have had suicidal thoughts, with 6.7 in 100 people actually attempting suicide and 7.3 in 100 choosing to self-harm.

Statistics published by the Office for National Statistics (ONS) has shown that three quarters of all suicides in 2016 in Great Britain were male. In 2016 alone, there were 5,668 registered suicides – 4,287 were male and 1,381 were female. The most common age for male suicide was 40 to 44 years old, whereas for women it was 10 years later – 50 to 54 years old. Despite this, there were 202 fewer suicides registered last year, however suicides and mental health problems are still a big problem in society today. 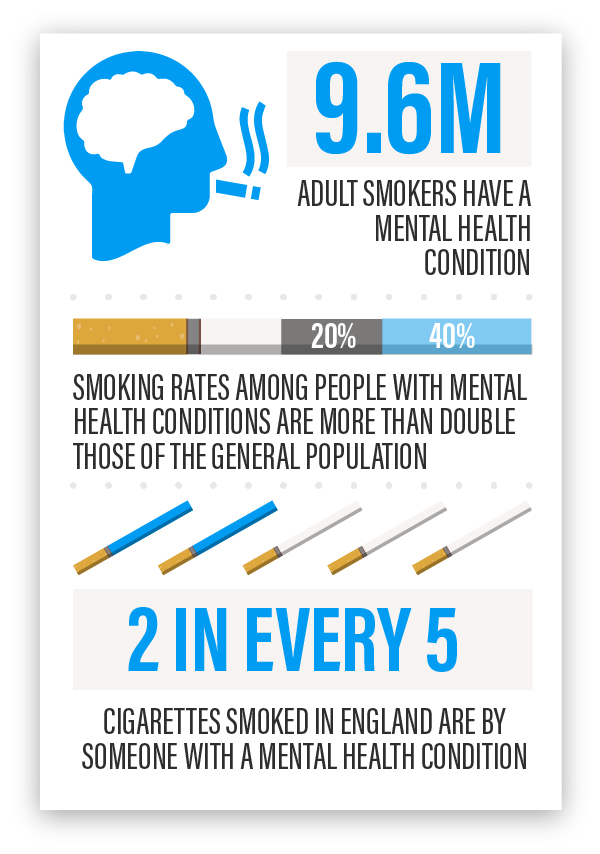 In the UK, regular adult smokers with depression is twice as high compared to adults without depression (approximately 40% vs. 20%). Research shows that 9.6 million adult smokers in the UK live with a mental health condition, and two in every 5 cigarettes in England are smoked by individuals with a mental health condition. Studies by the NHS have shown that people’s anxiety, depression and stress levels are significantly lower after they stop smoking, when compared with those who carry on smoking. Not to mention their quality of life and mood improves considerably.

According to a report by Public Health England (PHE), people with mental health problems smoke more on average and have higher levels of nicotine dependence than the population as a whole. A third (33%) of people with mental health problems and more than two thirds (70%) of people in psychiatric unit’s smoke tobacco based products. While in the last 20 years the UK has seen large reductions in smoking rates in the general population, the same cannot be said for those with mental disorders.

New research by Cancer Research UK published earlier this year has found that stopping smoking could in fact help improve the symptoms of depression. Researchers from Kings College London and Charles University in Prague studied 3,775 participants attending a stop smoking clinic in the Czech Republic. Results show that successful quitters showed a large improvement in their depression with two-thirds (66.3%) of those who had moderate or severe depression when smoking describing minimal or no symptoms of depression during their one year follow up appointment. Therefore, quitting smoking may help to improve depressive symptoms and, thus, improving mental health as well as physical health. However, the study notes that people with depression were still less likely to quit successfully than those without, perhaps due to the fear they won’t be able to cope without nicotine.

Dr Leonie Brose, a Cancer Research UK fellow based at King’s College London, said: “Our study shows that stop smoking services can be very effective at supporting people with depression, and that increased visits greatly improve the success of quit attempts.” Alison Cox, Cancer Research UK’s director of cancer prevention, said:“This study draws attention to a vulnerable group who need more specialist support in their attempts to give up smoking.” 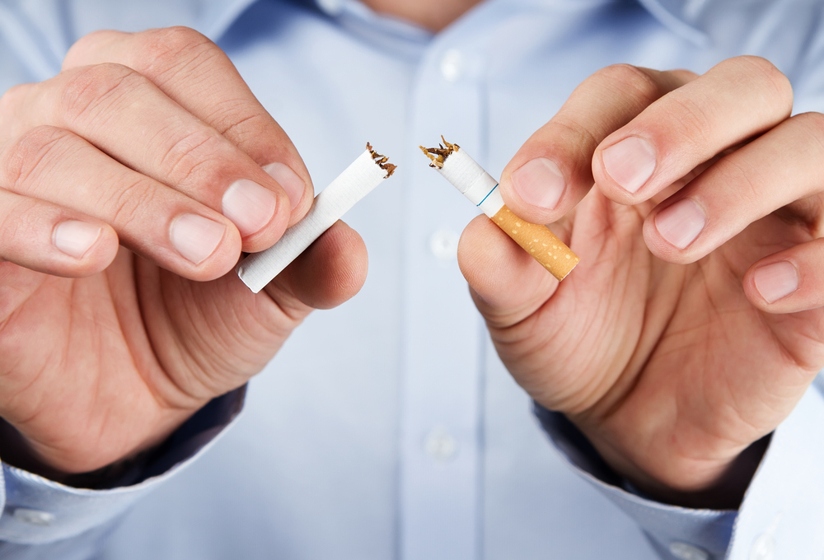 The Royal College of Psychiatrists has suggested that quitting smoking can help individuals be less depressed and anxious, and in some cases, can help as much as anti-depressants. According to researchers, the more you smoke, the more likely you are to have a mental health condition; feel anxious or depressed; think about suicide (and go onto commit suicide); and overuse drugs and alcohol (which can make mental health conditions worse).

How do I stop smoking when I have a mental illness?

According to the Mental Health Foundation, people with depression and other mental health conditions can find it particularly difficult to give up smoking and experience stronger withdrawal symptoms and craving. You need to find what treatment is best for you, to avoid getting stressed and making your mental health condition worsen.

Think about medication, such as: (Royal College of Psychiatrists)

This is a way of giving your body the nicotine it craves without using cigarettes. It comes as skin patches, gum, lozenges, tablets, sprays or inhalers. NRT doubles your chance of giving up completely. E-cigarettes are another way to replace nicotine which you can try.

This will reduce any craving for nicotine, but can make it hard to sleep – and might make you anxious. You should not take it if you have had epilepsy (seizures or fits), bipolar disorder (manic depression), are a heavy drinker, have an eating disorder or have recently stopped taking sedatives or medicines for anxiety.

This cuts down the craving for nicotine – but, if you do have a cigarette, it also cuts down the pleasure you get from it. However, there have been reports that it can make you anxious, depressed, agitated and suicidal. It can also give you mood swings and make it hard to sleep, even if you don’t have a history of mental health problems. If you develop any of the side-effects above, you should stop varenicline straight away and see your doctor as soon as possible.

Other types of support:

Get advice from your doctor, nurse, pharmacist or other health care professional

Get help from a specialist “smoking cessation” practitioner. You can find them in your GP practice, an NHS stop smoking service, or a pharmacy

Use telephone or internet support

Pair up with a friend who is also trying to stop 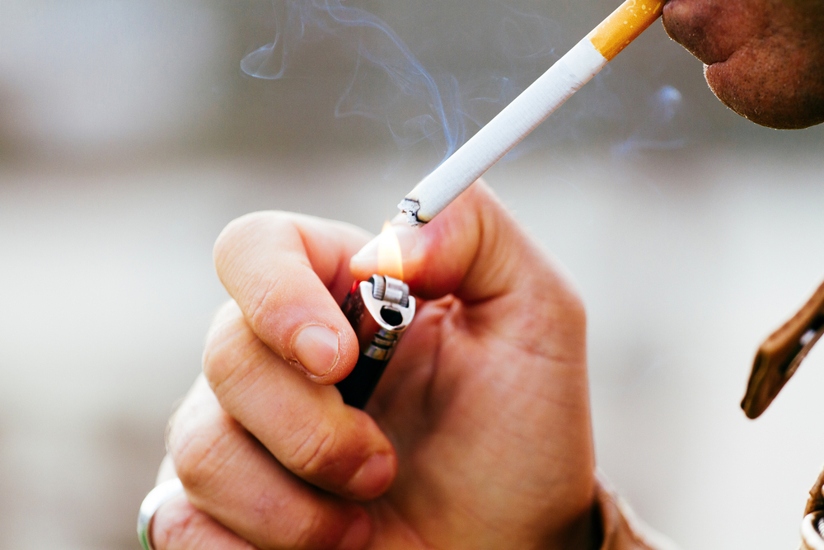