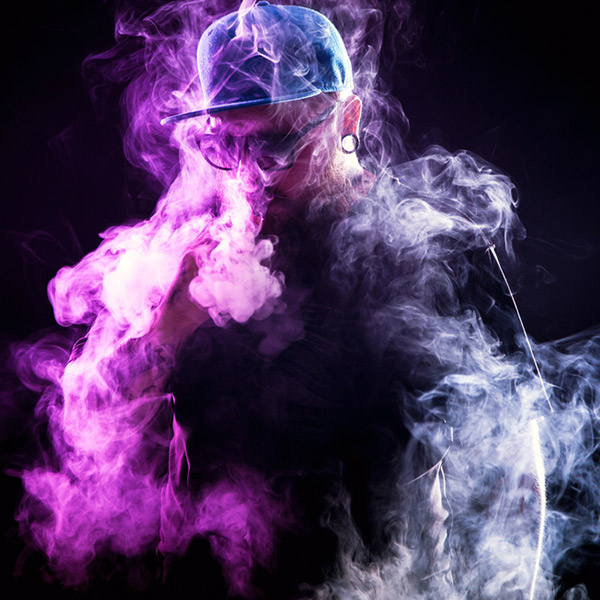 But before we get into those, and in the interest of padding out the runtime, here’s a little background on where we’re going with this.

Considering that ‘powerful tech’ generally just means ‘sub-ohming’, this is actually a surprisingly narrow part of the market. Sub-ohming first came to prominence back in 2015, when we were young, and our hearts were open books. The idea of pushing coils to lower and lower resistances and mods to higher wattages was a groundbreaking one, but by the end of the year, large swaths of the vaping world were covered in anvil-shaped vapo-cumulus thunderheads. And we haven’t look back since.

In fact, the sub-ohming world has been flourishing with new tech to drive bigger and bigger clouds, mostly in the form of rebuildable atomisers (both of the dripping and tank varieties). Endlessly configurable, these have become a source of obsession for those looking for ever bigger clouds.

But they’re not ideal for an everyday vape. Since you have to assemble your own coils and wicks, they can be time-consuming. Rebuildable tank atomisers (RTAs) can be finicky and leaky if not maintained correctly, and dripping atomisers demand constant attention. Don’t get us wrong—we wouldn’t sell RTAs if we didn’t believe that they have their place.

But for a powerful all-day vape, there’s no beating a traditional tank-and-coil-pack setup. So here we go: here are the best ones.

The Cleito EXO is Aspire’s next-gen Cleito tank. It’s been redesigned around a metal chassis, rather than a glass body, which gives it a distinctive look and a serious edge in durability over its competitors.

The airflow system has also been redesigned to feature huge machined airholes near the top of the tank, which feed a ton of air down into the tank.

It’s still compatible with standard Cleito coils, making it a great all-rounder. But it’s also compatible with the new Cleito EXO coils, which run a significantly lower resistance at only 0.16 ohms. This means they can be pushed as far up as 100W, opening whole new worlds of meteorological exploration.

We’ll be honest here—we mostly included this tank to prove that we did do our homework after all. If you’ve found this page, it’s likely that you’ve read the praises of the NRG on four or five other pages about the exact same thing.

And why not? The NRG a solid tank. Probably the most leak-free tank you can buy, even while you’re refilling it, which is saying something. Stuff like insulation obviates any overheated pulls, and the mesh drip tip prevents spitting.

The coils, however, are where the NRG tank truly shines. The GT4 and GT8, at 0.15 ohms each, deliver on that low-resistance promise of clouds while keeping the flavour front-and-centre: no mean feat. Vaporesso also offers coils up to 0.4 ohm resistances, as well as their proprietary CCell ceramic coils.

You knew it was coming. Smok has made its name in the sub-ohming business, so it’s at home on a list like this.

The TFV8 X-Baby is somewhat of a stripped down, cloud-producing machine. It has enormous airflow holes, an easy-refill system (since you’ll be going through e-liquid so quickly) and impeccable build quality.

The X-Baby coils also come as varied as they do powerful. The standard kit includes 0.4 ohm and 0.25 ohm coils, but Smok offers a sextuple-coil (that’s six (6) coils) setup running 0.2 ohm wire, which will have you blowing clouds like you’re at a competition.

The Cascade won’t win any beauty contests. It’s got these weird bevels and the enormous airholes make it looks like something out of Power Rangers. And it’s enormous. It’ll make your biggest, most aggressive mod look puny.

But what it lacks in aesthetics, it more than makes up for in function. The gaping airholes do let in lungfuls of air at a time. The GTM coils that it comes with deliver on flavour and produce huge amounts of vapour. And if sub-ohming isn’t you thing, you can also use the Cascade with the standard Vaporesso GT coils.

Yeah, okay, the TFV12 is another given from Smok.

It features all the same rock-solid construction of Smok’s other offerings, plus a locking topfill switch to prevent it opening in your pocket, and an available Pyrex bubble glass to hold up to 8 ml of juice (don’t tell the TPD).

But honestly, the coils make the tank in this case. The TFV12 comes pre-installed with their T12 ‘duodenary’ coils—which is a fancy way of saying they stuffed 12 coils inside. If you’re a true crazy person you can get V12 atomisers with up to 14 coils. Both of which can be driven up to over 200 watts. And they’ve lately released a 0.15 ohm mesh coil — meaning even more surface area, meaning even bigger clouds, etc.

Thank you for the enormous coils, Smok. For the moment, I think you’ve won. So you can slow down with all the “King’s Sword” Game of Thrones stuff.

Uwell, we’re looking at you too.

Okay, time to calm down

So I’m feeling a bit of a buzz just thinking about how much vapour these tanks can produce, so I’m going to go lie down.