According to a new Government plan to combat smoking, ministers have suggested that people should be allowed to vape in the office, and enclosed public spaces, in order to encourage vaping rather than smoking tobacco products. The Government have announced that they intend to implement a “smoke free generation”, with a series of new targets set to cut smoking rates by a quarter in adults, and to curb smoking in younger generations.

The Department of Health has called for e-cigarette use, also known as ‘vaping’, to be reconsidered in offices and public spaces. The Government’s Tobacco Control Plan for England calls to “maximise the availability of safer alternatives to smoking” and support smokers turning to nicotine substitutes. Evidence clearly shows that e-cigarettes are significantly less harmful to an individual’s health than smoking tobacco. The Government backed this idea and proposed they would “seek to support consumers in stopping smoking and adopting the use of less harmful nicotine products”.

Public Health England (PHE) recently published the an article speaking of the use of e-cigarettes in public places and work places, and emphasised that supporting smokers to quit smoking is highly important to creating a “smoke free” country. To do this, they called for a more enabling approach to make ‘vaping’ an easier alternative to smoking, suggesting that vapers should be able to smoke freely in office spaces and enclosed public areas. By enabling this, companies are encouraging the use of e-cigarettes and starting an initiative to prevent smoking country-wide. 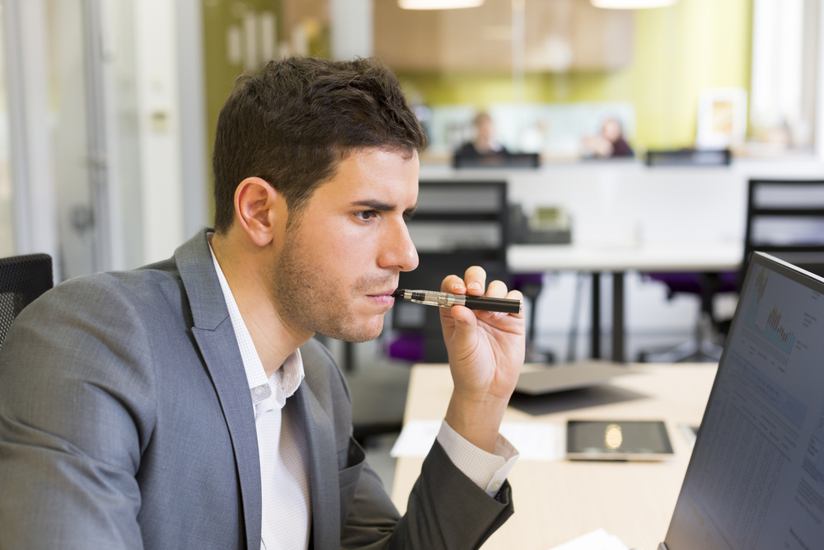 This not only benefits the user but the company too. Research conducted by Vapourlites found that a non-smoking office worker has to work 35-minutes more than smokers. During a seven-hour working day (excluding lunch hour), on average an office worker might take five minutes to smoke every hour. This results in 35-minutes of paid break time, per day. Research has identified that taking cigarette breaks hourly, each day, can total up to a week off work per annum. This results in the company losing out, as well as the smoker damaging their own health. Choosing to allow e-cigarettes in enclosed public spaces and offices can benefit everyone.

Health officials have stressed that it is entirely down to individual organisations to choose their own policies on vaping. However, they highlight that PHE’s guidance explains that laws banning smoking in the workplace and enclosed public spaces do not cover e-cigarettes. Essentially, e-cigarette use is not covered by smoke free legislation, and therefore it shouldn’t be included in policies which ban smoking of all varieties. As well as this, e-cigarette smokers should not be required to use the same area as smokers as this could undermine their ability to stop smoking and stay smoke free.

Evidence by PHE has found that the risk of e-cigarette liquids, and the vapour they produce, has a profoundly low effect on others. In an independent review, findings showed that e-cigarettes do not contain the same level of toxic chemicals as tobacco cigarettes. In fact, these levels have been found to be so low that Public Health England and the Royal College of Physicians estimate that e-cigarettes are ‘around 95% safer than smoking’. This makes them safer to use than any other type of tobacco-based product, and henceforth why the government is encouraging the use of vaping devices inside public places. It is important to note that e-cigarettes are not risk-free. But based on current evidence, they carry a fraction of the risk of cigarettes to both the user and people around them. 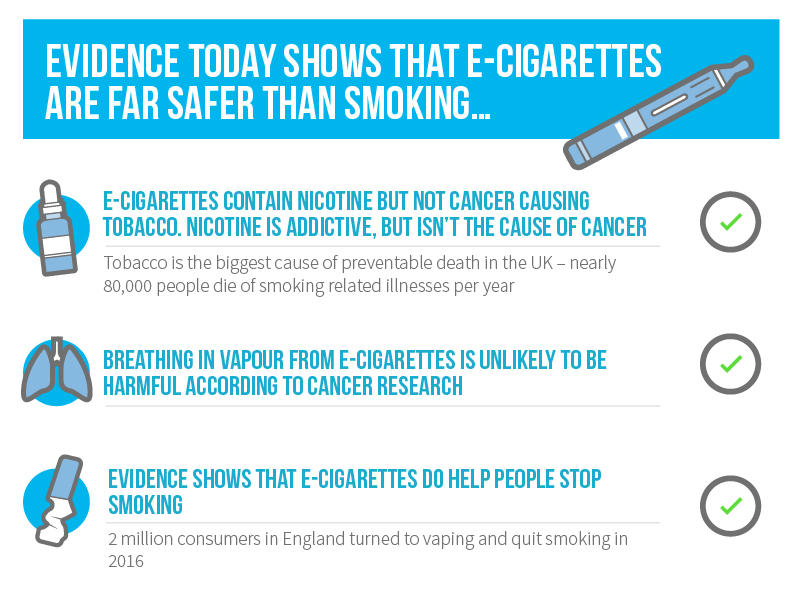 Public Health England has reported that the principal reasons given for e-cigarette use are to support cutting down or quitting tobacco use and to help avoid relapse to smoking. Studies suggest that smoking e-cigarettes do help people to quit. In a survey conducted by the Office for National Statistics, 2 million consumers in England had used e-cigarettes in an attempt to quit smoking and had stopped entirely. In addition, a further 470,000 used e-cigarettes as an aid to stop smoking altogether, or not as frequently.

E-cigarettes have been proven to help reduce the number of people smoking in England. Six years ago, just over 20% of people were smoking cigarettes and today, this figure has decreased to the lowest level since records began.

Public health minister Steve Brine said: “Britain is a world leader in tobacco control, and our tough action in the past decade has seen smoking rates in England fall to an all-time low of 15.5%.” The government has now announced new targets to further reduce this quantity to 12% by 2022 and cut smoking among 15 year olds from 8% to 3% or less.