Here’s my number, so vape me maybe? 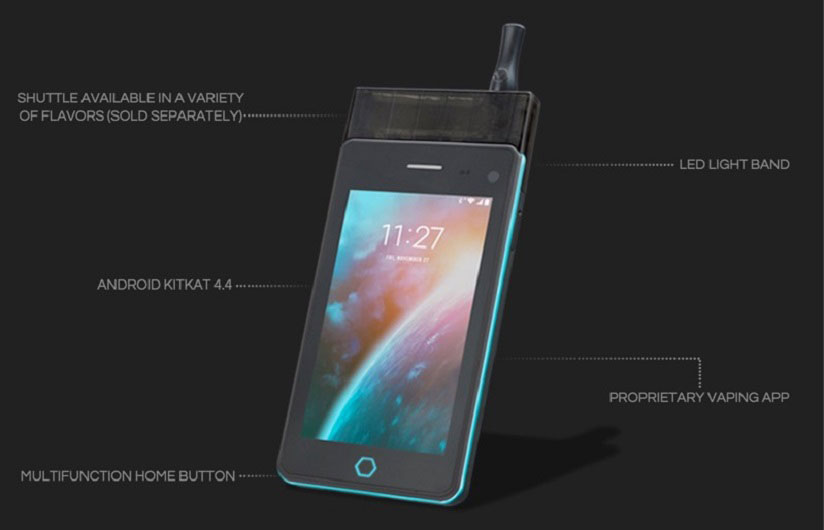 Vaping enthusiasts and technology geeks should listen up – as the latest development in vaping technology is sure to be a crowd pleaser.

Vaping traditionally requires a user to carry an e-cigarette device or big and bulky ‘box mod’ around with them in order to get their fix. However now thanks to a few clever techy types working their magic, vapers can get a smartphone which doubles as an e-cigarette.

The Jupiter IO 4, a 4G LTE Android smartphone not only has a wonderfully vivid 5.3 inch display, but also contains a back cover that users can remove and replace with cartridges of e-liquid; your device is now ready for vaping.

All users are required to do is attach a mouthpiece to the phone and begin their vaping experience.

The company responsible for this rather clever innovation describes it as integrating “texting, talking, surfing, and vaping into one spectacular, innovative technology,” that will “change the world as we know it,” the device includes the ability to vape fluids, medicines, and something called nutraceuticals.

The smartphone comes with all the usual novelties, including interactive surround lighting, a wall charger and USB cord. Not only does the model allow its owner to vape on the go, it also features its own vaping App that records your vaping habits and records them so you can easily track your vaping frequency; simply push a button on the display to send a signal to your phone that the vaping process has been triggered, then use the app to track not only how many times you’ve vaped and when, but also how much juice is remaining and whether it’s a traditional tobacco flavor or something a whole lot more exotic.

Given that between Whatsapping, playing Candy Crush and puffing away you’re going to need a lot of extra power, the phone comes equipped with dual batteries.

The amount of camera pixels and storage space are yet to be disclosed, but with an abundance of smartphones currently on the market, this vaping model may just have the edge thanks to its indisputable originality.

Priced at $499 on an American website store.vaporcade.com, customers are limited to 5 per person due to high demand.  So if you fancy being a part of the latest in vaping technology, don’t hesitate – they’re tipped to sell out fast!