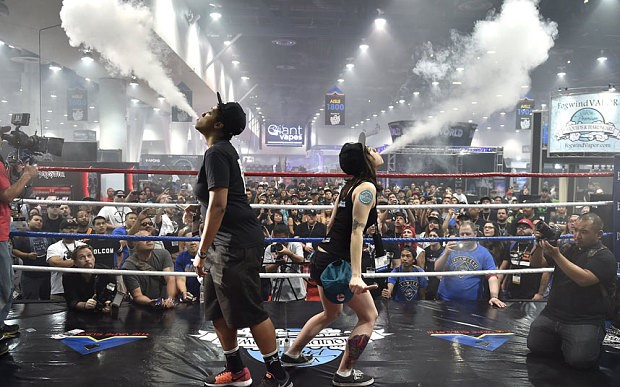 “Cloud chasing” tournaments see vapers (typically two at a time) compete head-to-head in an attempt to exhale the largest possible cloud. A small panel of judges then decide which of the competitors is to go through to the next round. To achieve such large clouds, vapers have to inhale an unusually long draw, then tilt their heads back before billowing the plume of vapour out from their mouths.

Where did Cloud Chasing Originate?

Cloud Chasing is thought to be an American custom that grew in popularity and has now taken hold in the U.K. and other pro-vaping countries. Although, cloud chasing can take place in vape-friendly bars and clubs; larger festivals and events are beginning to incorporate Cloud Chasing competitions as part of their entertainment.

Anyone aged 18 and over can compete in the contest. Smaller competitions allow for beginners to try their hand at this art form. Those who simply wish to watch are also welcome.

What will you see at a Cloud Chasing Event?

Build Area: A build area allows vapers to learn new rebuilding techniques for their devices.
Professionals are also on-hand to offer their expert advice, and to answer any technical questions vapers may have.

Cloud Tricks: Presently, one of the most popular vaping tricks involves exhaling rings / hoops / O’s, guiding them with your hand, then, once they have grown into a large enough target; blowing smaller rings through this target. Other tricks include blowing vape hearts and exhaling three vape rings that form the outline of Mickey Mouse.

Stands: The majority of the larger vaping festivals and events attract a range of vaping stores who often give out freebies. You can also source new hardware, devices and e-liquids.

DJs: Vaping festivals and events are naturally a community event, so you can experience a real feel of unity, identity and that longed-for understanding that is rarely given by the general public. Music tents, DJs and other forms of entertainment really add to this vibe, and are befitting to the style of the event.

Where would I go to experience an event like this?

VAPE JAM UK
Where: Excel London
What: The three day event is host to approximately 300 exhibitors and is the leading Electronic Cigarette expo in the United Kingdom. Visitors can also enjoy performances at the centre stage, as well as enjoying food, drink and music throughout the course of the event.

The Vaper Expo UK
Where: Birmingham NEC Arena
What:  The two day (public) event is host to approximately 200 exhibitors. Visitors can expect to see guest appearances from ‘Infiniti’, an illusionist and magician; DJ Dantics, a popular musician within the vaping community; IBot, a vaping Robot visitors can have their picture taken with.

Vape Fest
Where: The Greenhous West Mid Showground, Berwick Road
What:  Vendors (merchandise and freebies), raffles, food and drinks, models, musicians, and other forms of entertainment.
Free admission – Donations will be accepted for Children In Need