Brexit or Bremain: how will vaper’s vote? 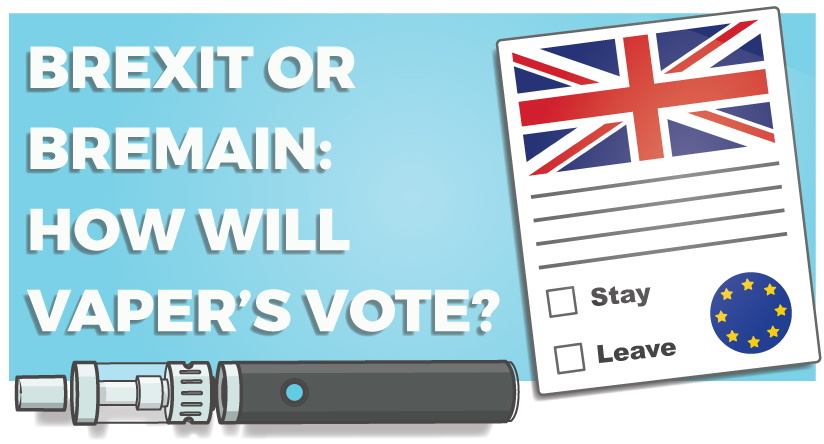 Vapers have had a tough run, they thought they’d finally found the solution to all their problems. They’d successfully quit the evil sticks of death for good. And were on the path to a better, healthier and happier life. Until, politicians both in Europe and UK parliament decided “enough is enough” for this ‘tobacco menace’ (all that tobacco in e-cigarettes hey!). By now you should know a fair bit about the TPD. It’s only the biggest piece of legislation affecting the vaping industry ever. To recap a revision of the Tobacco Products Directive was brought in last month on the 20th May. It meant reducing the strength of nicotine in e-liquids down to 2% of all contents, excessive warning labels, limiting the size of e-juice containers and banning e-cigarette promotion/ advertising. It meant a whole host of new restrictions for us, but supposedly a better regulated, therefore, higher standard of product across the industry. But what will the referendum vote mean for vapers on the 23rd June?

A number of politicians sought to oppose the TPD being introduced, with Lord Callanan starting a motion to the block the TPD on Monday the 6th June. Only three days later he amended his motion to one of “regret”. After 52,000 people signed a petition supporting the movement to demand Parliament to debate the implications on public health of the Tobacco Product’s Directive regulations on e-cigarettes. It was also intended for the Prime Minister to negotiate with Brussels that Britain opts out from Article 20 before the EU referendum, therefore, taking this issue out of affecting the vote. There are now three motions in play in the Houses of Parliament about vaping regulations, and all are trying to make the Government rethink its policy that has been set out by the TPD.

There are an estimated 2.5 million vapers in the UK that will have a considerable effect on the EU Referendum. They are often ignored and their opinions are overlooked. Time and time again, vapers have been opposed by politicians and the EU. So no wonder they feel angry at the relentless attacks they have endured on their industry. According to a survey of 1,200 vapers carried out by ecigarettedirect.co.uk, 56% stated they would vote to leave, 17% would vote to stay and the remaining 27% were undecided. These figures differ considerably from the latest YouGov opinion poll of regular voters in the UK, putting Bremainers at 39% and Brexiteers at 39% with 18% undecided. Therefore, vapers are 18% more likely to vote leave than an average voter in the UK. Of course, not all e-cigarette users are informed about the TPD, and will vote according to their political views rather than the effect it will have on their smoking cessation habits. And even those who are informed are worried about the wider consequences of the EU referendum when considering their vote.

Whichever way you choose to vote is up to you. The referendum is a chance for everyone to make a difference to way the UK works with the rest of Europe, and how the UK governs itself. Of course, if we do leave we are entrusting our government to make the right decisions and, really, that’s the decision being made here. Do you trust our government to take us forward and regulate with your best interests in mind?