A History of Smoking 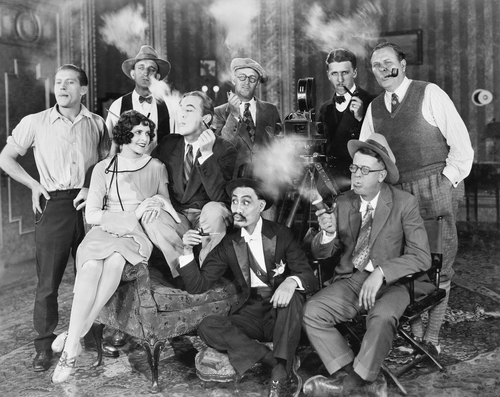 The tobacco industry offers a varied and colourful past. Whether or not one agrees with the premise of smoking, the aptitude of, and the cognitive marketing techniques employed by such companies in order to evolve the product into a major consumerist item is admirable. Those who successfully marketed the product recognized the wider desires of large swathes of the population. The cigarette was used as a fashion item, as a political statement and even, at one point; a “beneficial” health product.

Journeying back through the years, ‘a history of smoking’ will reveal the changing societal attitudes, political agendas and marketing techniques surrounding the tobacco industry. Discover how tobacco – a once global sensation has been revealed to be one of the biggest marketing con played across the centuries.

According to the University of Dayton, ‘The first known advertisement in the USA was for the snuff and tobacco products of P. Lorillard and Company and was placed in the New York daily paper.’

• 1870s – Companies began to create innovate and colourful images to represent their products and to attract consumers.

• 1915-1918 – Cigarettes were given to the troops serving in the first and second world wars as a form of small luxury when serving their country.

• Colour magazine and newspaper ads became increasingly popular. Slogans were created in an attempt to stand apart from other companies. Other methods included celebrity or doctors’ endorsements. In some adverts, children were even featured.

Cigarettes, having previously been seen as a phallic symbol, representing power and male repression were smoked by many women in a rebellious manner, as a way to disregard patriarchal oppression.

In a study, ‘From social taboo to “torch of freedom”: the marketing of cigarettes to women’, Amanda Amos and Margaretha Haglund noted:

‘Soon the cigarette became a symbol of new roles and expectations of women’s behaviour. Tobacco companies seized the opportunity in the 1920s and 1930s to exploit ideas of liberation, power, and other important values for women to recruit them to the cigarette market.’

‘Marketers developed new social images and meanings for female smoking to overcome the association with louche and libidinous behaviour and morals. Smoking had to be repositioned as not only respectable but sociable, fashionable, stylish, and feminine. The goal was a potential doubling of the market. As described in 1928 by Mr Hill, the president of American Tobacco, “It will be like opening a new gold mine right in our front yard”.’

Women were further targeted by those marketing cigarettes through their desire to be seen as fashionable. Ironically, their need to conform to the ‘societal norm’, in order to appear ‘normal’ did not liberate them from the constraints of social expectations, it instead rather enslaved them to it.

In the study, ‘From social taboo to “torch of freedom”: the marketing of cigarettes to women’, Amanda Amos and Margaretha Haglund noted:

‘The president of American Tobacco saw the potential of selling cigarettes to women as a fat free way to satisfy hunger. The timing could not have been better as slimness was coming into fashion along with bobbed hair and short skirts.’

‘The Lucky Strike campaign “Reach for Lucky instead of a sweet” of 1925 was one of the first media campaigns targeted at women. The message was highly effective and increased Lucky Strike’s market share by more than 200%. With the help of the father of public relations, Edward Bernays, American Tobacco made Lucky Strike the best-selling brand for two years.’

Amelia Earhart, a prominent figure in women’s history and the first woman to fly across the Atlantic; 20hrs 40min (Fokker F7, Friendship) was used in Lucky Strike’s advertising campaigns. The advert read:

As with modern advertising, associating the product with a successful, admirable and powerful individual adds further weighting and credits the brand with a similar level of respect from potential consumers.

With cinema offering a taste of the high life to the common working man; actors and actresses such as Audrey Hepburn, Rita Hayworth and Rudolph Valentino brought a certain elegance to the habit. The steady stream of beautiful and glamourous film stars in their tailored suits and gowns allowed for some of that Hollywood chic to “rub off” and become associated with smoking as a habit. It was possibly this time in which the suave image some associate with smoking was properly enforced.

• The Public Health Cigarette Smoking Act, came into fruition, meaning companies were not permitted to advertise their product on television, causing companies to look to magazines, newspapers, and billboards to market their products.

• The Surgeon’s General Warnings were placed on all cigarette packaging and was featured in all advertisements relating to smoking.

With the accumulation of medical reports building and being actively projected into the public domain; smoking quickly became less popular. Realising the danger the habit posed to those who inhaled passively, especially in terms of expectant mothers and babies (as cot deaths were linked with passive smoking), laws were passed to further deter people from the habit.

Realising that the suave, cool or glamourous attribution smoking had been given was no more than a smart marketing gimmick; more and more members of the public started viewing smoking as a ‘filthy’ and dangerous habit that proffered some to overtly cough, splutter and waft the smoke away in the presence of those smoking in close proximity.

The Family Smoking Prevention and Tobacco Control Act was enforced, banning the tobacco companies from sponsoring events or featuring their logos on products on promotional apparel.

Whereas smoking does not carry the same glamour as was once projected in the 1900s, vaping has quickly picked up where smoking left off in terms of Hollywood glamour. Vape pens are now the actor and actresses accessory of choice, with stars such as Leonardo Dicaprio, Kate Moss and Katy Perry all proudly and publically drawing on their pens. Most have also been seen to vape at black tie events such as the BAFTAs.

However, this too would be a gimmick. Fashions will come and go, but the valuable lesson of learning to respect our bodies by valuing our health should be one that is not taken lightly. The law has now changed in terms of marketing, with advertisements for cigarettes being banned. Many have now chosen to switch from cigarettes to vape pens owing to the fact that vaping is simply healthier. Medical reports undertaken by the NHS and Public Health England have actively encouraged smokers to make the change. According to the Guardian, ‘65% of those who were using an e-cigarette on a daily basis went on to make an attempt to give up smoking within the year, compared with 44% of smokers who were not using e-cigarettes.’ Very few returned to smoking after having taken up vaping.